Michelle gets another good profile from the Baltimore Sun. 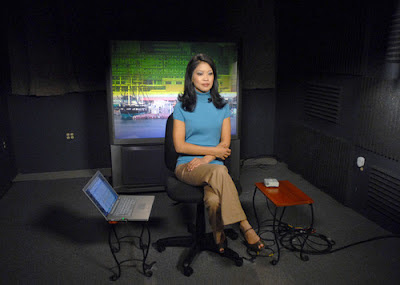 Michelle Malkin has worked for Fox News for eight years and has two popular blogs that get 15.1 million page views per month. (Sun photo by Barbara Haddock Taylor / March 3, 2008)

The shingle-style house straddles a hillside, its windows offering sunny views in three directions. Games, books and DVDs topple from living-room shelves. In the kitchen, a young mom helps her 7-year-old daughter feed fabric through a sewing machine.

The place seems more all-American home than hideout, but fewer than 20 people know that Michelle Malkin, mother of two young children, loyal wife of 15 years -- oh, and scourge and sometime nightmare of liberals in her newspaper columns, TV spots, books and writings on the Web -- moved to this place in the Baltimore area a year and a half ago.

If you're seeking a living symbol of America's rancorous political divide, look no further than Malkin, one of the most popular and provocative voices on the modern right. The only daughter of first-generation immigrants from the Philippines, Malkin, 37, began blogging on politics nine years ago after a successful run as a newspaper columnist and has become a menace out of proportion to her Size 0 frame.

Two years ago, in the midst of an Internet contretemps over military recruiting on college campuses, left-leaning activists posted her home address and phone number -- and photos of her house and neighborhood -- online. They apparently were trying to exact revenge because she had published information they felt she shouldn't have.

The Malkins found a new home. For now, only a few friends know exactly where to find them.

"Sadly enough, it comes with the territory," says Malkin, whose most recent book, Unhinged: Exposing Liberals Gone Wild, argues that the political left, far more than the right, suffers the presence of "moonbats" -- Malkin-speak for those fated to play out life's hand with a less-than-full deck. "I'm used to it. But when you have kids, you have to be cautious."

As she makes snacks for her daughter and 4-year-old son, helps her husband, Jesse, get ready for a run and steals glances at an open laptop on the dining-room table, it's hard to conjure the right-wing menace who inspires hundreds of venomous e-mails a week. "[You] ought to be shot between those Viet Cong eyes," reads one. "How does it feel to be a paid prostitute for the Republicans?" says another. "Go get some collagen injected in your lips, it makes you look more the part."

"Stirring arguments, aren't they?" says Malkin with a roll of her eyes. "That's what you resort to when you're losing the debate -- name-calling and ad hominem attacks."

A snippet of news flashes across her Mac. "Excuse me a minute, I need to check this," she says, her brow furrowing. She sits down for a few minutes' work.