Differentiating Between Walking And Jogging 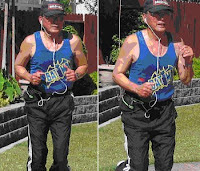 Anaerobic thanks to French left-wing media and intellectuals for now providing us with a more esoteric comparison between walking and jogging.

The Belmont Club links to a news item which essentially criticizes newly-elected French President Sarkozy for electing to publicly take up jogging, rather than the more stately and revered art of walking. And the left-wing critics are irked even more because Sarkozy on several occasions opted to wear his favorite NYPD T-shirt during his public jogs.

Anyway, according to these same intellectuals, “Western civilisation, in its best sense, was born with the promenade. Walking is a sensitive, spiritual act. Jogging is management of the body. The jogger says I am in control. It has nothing to do with meditation."

Now I may not be an impartial observer since I jog regularly, but I also participate in long walks on occasion when I get more time to burn with my extra calories. I find both practices exhilarating and invigorating. And thus, many of us similarly inclined may find the entire issue at the very least, quite silly.

But walking is meditation, and jogging is not? Now, that is quite a wimpy stretch. Any uncorrupted mind can meditate in most any situation or form of activity the person may be engaged in.

For this I am reminded of a sermon from long ago given by an old grizzled Jesuit father to a group of antsy teens forced to hear Mass in the middle of a torrid summer noon. He intoned, a pastor was giving a sermon on prayer and praying to his diverse parishioners in some rural town of the south. He proceeded to ask his parishioners in attendance what would be the proper way or position to pray. Each parishioner gave his or her own version on how to pray - kneeling down with hands clasped close to the chest, sitting down with eyes closed and lifted up, etc. In short, all pious motions in obvious respect for the Almighty.

Until, one timid black man in the back started his turn and said he was confused why they should have special set positions in order to pray properly. And he proceeded to unravel his case. One day, he said, while fetching water from narrow and dark well, he fell and landed head first at the shallow bottom of the well. He thanked God that the water was shallow and did not drown him. But for God's sake who was going to save him from his predicament, since he could not move an inch, or lift himself out of that well, and worse, pretty soon the water level will rise and drown him? So in that most unusual position, he prayed to God like he had never done before.

And later on, some kindly soul got him out of the well, feet first. Now that was one effective prayer!

One commenter (RWE) at the Belmont Club had a thoughtful comment:

To the contrary, I have enjoyed many reflective moments during my runs, and once I even wrote a whole paper in my head during a run; the topic was options for launching the X-33 from Cape Canaveral. I probably have gotten even more useful thought out of my runs than my daily walks with my dog.

But I have found that I can run quite a bit faster if I don’t think about anything but running. Concentrating on speed really helps - but it is not nearly as much fun, and the effort required has nothing to do with physical exertion.

I agree that one could productively do a lot of mental gymnastics during runs or jogs, and personally, many knotty problems have been resolved during regular jogs.

But unfortunately and I surmise I speak for many of us, we do a lot of thinking, daydreaming, and more typically listening through the ear buds of our MP3s, because we do not want to be reminded that we are indeed jogging and not sitting down and enjoying a thirst-quenching Gatorade. Jogging is still a very irksome and wearisome rote and the less we are reminded that we are actually doing it the better. And thus for us, singularly focusing on the run, may not make us run further. We are just glad to be done with it without really being ever-alert that we are actually doing it.

And RWE ends with this tail-end snipe at the French. I suppose that he just couldn’t end without the obligatory sharp retort.

Maybe the president of France could take up bicycling – but, come to think of it, since Lance Armstrong came along perhaps that is not very French any more, either

And if I may add, isn’t American Tour de France winner, Floyd Landis, about to be exonerated of charges against his most recent tour win?
Posted by Amadeo at 7/06/2007 01:26:00 PM 6 comments: