The Voice(s) Of Elvis Presley 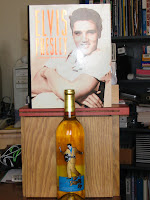 Elvis Presley has always been a phenomenon, both in life and in death. But more so in death, when we measure it in terms of financial successes, and even in popularity and longevity. His songs and other iconic items about him continue to tap into new areas of the globe, ably assisted by a mini-industry that was spawned by his enduring image and popularity, the Elvis impersonators, or as now nicely referred to, the Elvis tribute artists.

I had often wondered whether this personal but enduring child-like adulation of his singing that I treasure was a unique aberration, but still a local limited aberration. However, the continued world-wide and unflagging responses to his songs to this day would seem to belie this.

This brings one to wonder what exactly was in his singing that has made it so durable, in spite of all the equally gifted artists that have come and gone after him and the varying ways that songs are now both composed and delivered to ever-changing fickle audiences.

Why indeed should his old-style singing endure above the deluge of singing artists that now colonize the colossal entertainment firmament? After all, Elvis and the ensuing rock and roll phenomenon broke loose more than 50 years ago.

But rock and roll has undeniably prevailed, and Elvis continues to reign as its undisputed King, which title by no means just implies an empty and hollow attribution.