Hoping To Catch A Glimpse Of Mike Arroyo And Son Mikey

Approaching SF:(Click on pictures to enlarge) 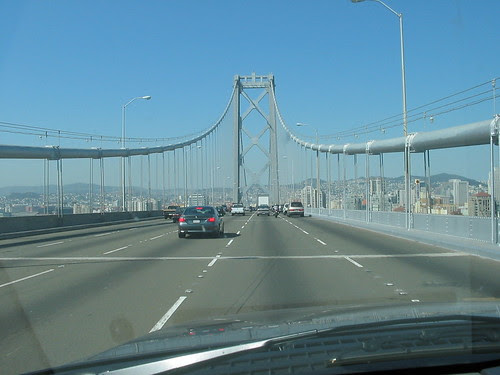 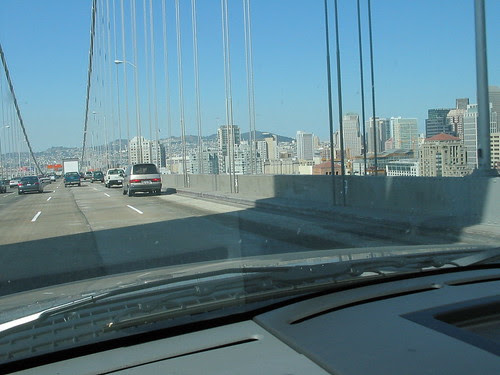 July 21st, Friday, was a trying day for us, trying to survive the heat wave that was gripping the entire Continental USA, with temperatures soaring as high as 114F, even in the normally cool Bay Area where cool breezes from the Pacific Ocean normally provide the buffer for any heat onslaught from the summer sun. Fog sheets that stubbornly tarry till the late mornings and eagerly make early showings in the afternoons can always be counted to cool the area, bringing down temperatures by as much as 20 degrees compared to inland areas

So what better time to take that trip to the coast, to Baghdad by the Bay, San Francisco, and Fogtown, Daly City. Egged on further by the naughty possibility of catching a glimpse of First Gentleman, Mike Arroyo, and political son, Mikey, who were said to be billeted in a downtown hotel, reportedly brought to the Bay Area by the arrest of former Agriculture Undersecretary, J. Bolante, in southern California for “visa-related” problems.

With the wife and three grandkids in tow, we were on our way by 9 a.m. for the 70 mile trip hoping to take advantage of the HOV lanes for vehicles with three or more passengers. We got to the Bay Bridge toll gate just in time to also get a free pass for having more than 3 passengers.

Coming from our Tracy side, from the East Bay, getting to San Francisco is much like meeting the most beautiful girl for the first time, in grand and exciting fashion. As one climbs the upper deck of the elongated Bay Bridge, which stretches 4.5 miles from end to end, one begins the process of actually meeting face to face that most beautiful girl for the first time. As the veil of anticipation is lifted coming out from the dark Treasure Island/Yerba Buena tunnel, the searing spectacle of the San Francisco skyline opens up in Cinemascope grandeur as the upper deck slithers through at treetop level the downtown area. The resplendent and familiar skyline looms large and inviting at a comfortable distance, close enough for one to recognize the many familiarly notable building structures.

We had to hold on to our bursting impatience, however, since we had decided to park the truck in Daly City and ride on rapid transit, BART. Friday was also the annual Spare The Air Day, the annointed date when all public transportation, trains, buses and even the fabled cable cars, would be free to the riding public for the entire day.

After a little grocery shopping session, purchasing fresh fruits and vegetables, Filipino bread, and the universally-liked dumplings, siopaos to those familiar with Chinese cuisine, we dug in for a little lunch. Ample preparation for our rigorous day of a walking tour of SF downtown. Dressed comfortably in t-shirts, jeans or shorts, and my handy Canon Powershot in ever-readiness, we were on our way by 1 p.m. 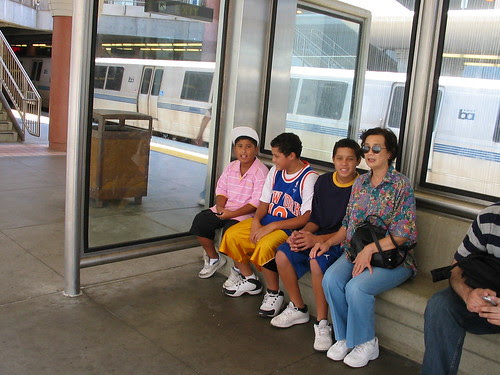 A brisk walk to the Colma BART station served to raise our energies up and prepare us for the 20 minute sedentary ride that would take us downtown. About six station stops later, we were ready to disembark at the first downtown station, Powell Street.

Emerging from the musty bowels of BART’s below street level station, we immediately basked in sunlight made hospitable by a steady cool breeze, very usual in SF downtown. Even in the thick of summer, including Indian summers grade, SF always enjoys steady cool breezes that meander through between tall skyscrapers, giving the impression of wind channels operating around the city. And as is usual with that kind of climate, sun-loving San Franciscans and the many tourists that crowd its hotels were all out in unabashed celebration, in their most undressed fashion. Swarms of tight tank tops, short shorts, and those now ubiquitous low-riding pants were in abundance. SF men’s fashions have not really veered much over these years, but the women’s have been taken to some highs and quite literally to record lows. Now so many things are taken for granted and accepted. Tank tops that cover only half of the upper torso and pants that have gone basically south, seemingly restricted downward only by nature’s unique placement of where the pubic hairline is. Pants of course do not go ankle-deep, mostly just knee-deep. 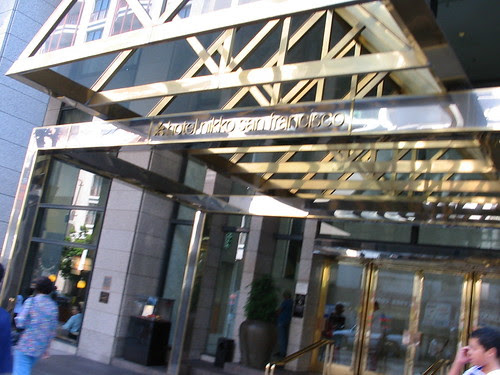 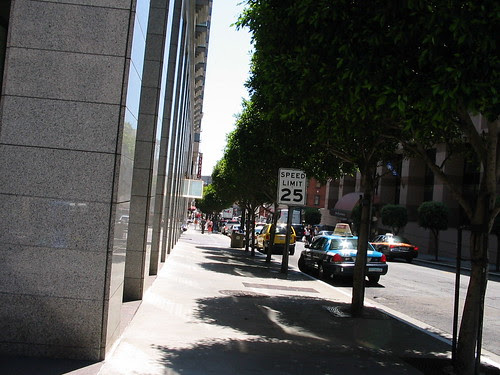 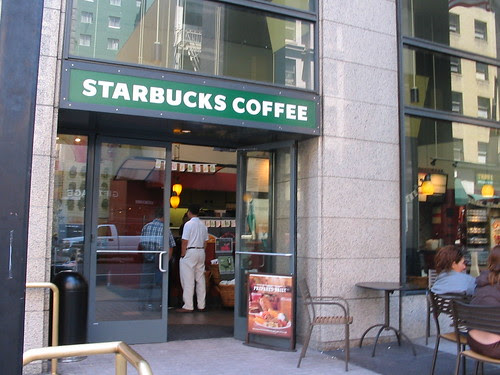 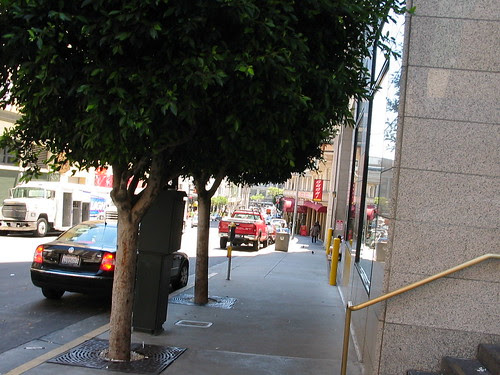 Anyway, with such pesky distraction resolved and set aside, we proceeded to climb a couple of blocks around the area of Union Square, anchoring a centerpiece which is a rather ancient monument memorializing Admiral Dewey’s naval exploits in the Philippines’ Manila Bay during the Spanish-American War. A left turn and we were at the front entrance of Nikko Hotel, the purported place where Mike Arroyo was supposed to be billeted. Staked the place for several minutes, making mental notes of the passersby and clandestinely stealing some picture shots from three sides of the hotel building. Though compatriots darted in and out of the hotel and from business tenants around the hotel, no clear sign of any Arroyo presence. Shared some uncomfortable moments when I had to stare at a couple of compatriots hoping to waken in me any possible latent signs of familiarity, and they in turn stared back. But no such luck and the antsy disposition of my walking companions finally convinced me to move on. 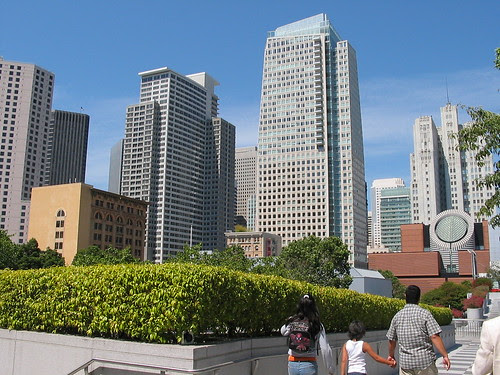 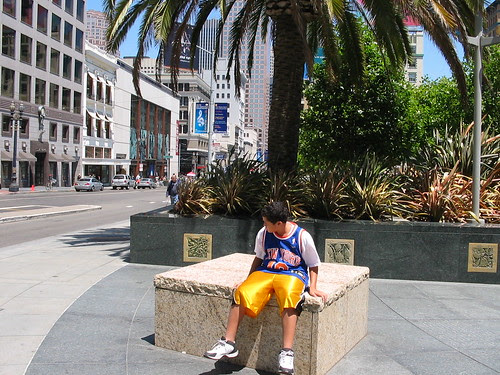 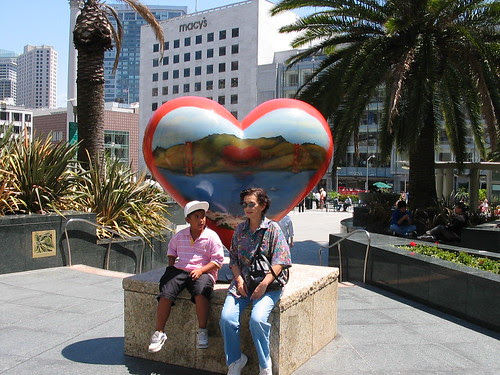 Next we parked ourselves in Union Square, where an art exhibit was in progress. And where also a good many of regular lunchtime habitués were either finishing up their Styrofoam-encased lunches or sprawled on the lush green lawns that border the park square for a few minutes of sun-worshipping. Seen more compatriots, some transparently tourists but mostly employees of businesses around the area enjoying a piece of their lunch break. Still no determinable sign that Arroyo or his group was around. Sidled close to some passerby to catch snippets of their conversations and maybe connect some of the dots.

A few more minutes of leisurely sleuthing and finally, thirst and hunger dictated the next move. So we hied toward Chinatown, a few blocks away. A round of dimsum and soda gave us our fill. And we were ready again for some strenuous walking, up and down the undulating hills of San Francisco. 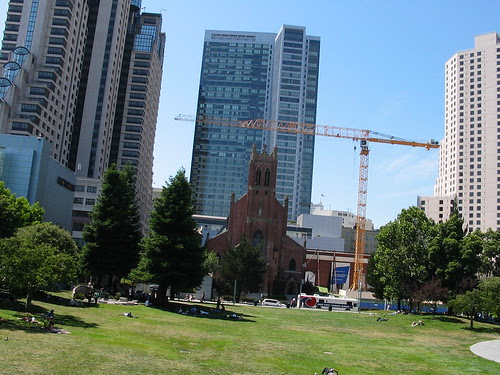 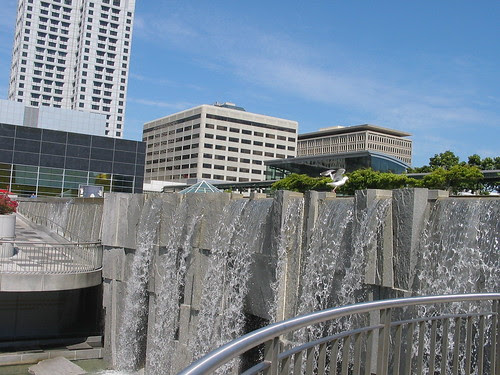 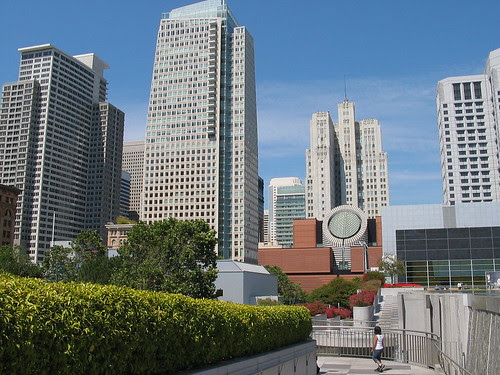 We headed toward the general direction of Yerba Buena Gardens in South of Market (SoMa), the newly rennaisanced and recently heavily invested area of SF. And where a good number of FilAms also reside, mostly elderly FilAms ensconced in high-rise affordable housing units. New, bright, and spanking buildings now circle the entire area which used to be referred to as the seedy and decrepit South of Market area. After the initial auspicious upgrade of the Moscone Convention Center some years back, suddenly the entire area has been transformed to an enviable sight at par with the rest of the city, and in some respects even better. Now as if to not completely obliterate vestiges of the past, the old and solitary St. Patrick Church along Mission St., continues to stand as proud sentinel pointing to its gloried past, impressive in its deep dark golden hue emitted by its brick structure, quite anachronistic in a newly-invigorated neighborhood of tall buildings hued mostly in drab gray or brown.

Many FilAms point to this church as their parish and as far as I can remember there has always been a FilAm priest to minister to its ethnic parishioners. Yerba Buena Gardens, with its modern urban greenery hemmed in the middle of the imposing structures around, is also where many FilAm events are held.

Again a nice menagerie of interesting scenery and pictures, but no sign of our enticing targeted celebrities.

4 o’clock p.m. found us loitering inside one of the buildings called Metreon, which specializes in kids’ games and movies, and exhibits. Got awed by a miniaturized mock-up of the ship Titanic and gushed at one of its original gigantic bell whistles displayed in the lobby.

Tired and a bit personally disappointed, we trudged to the way out and proceeded toward one of the BART stations along Market Street, some three blocks away. 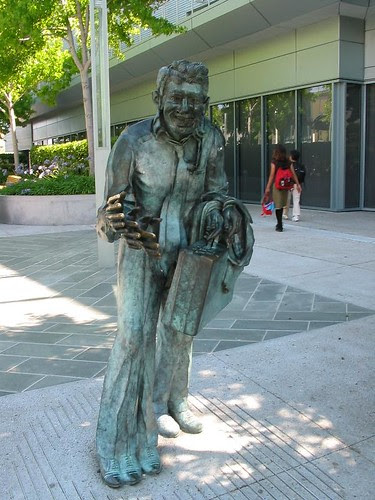 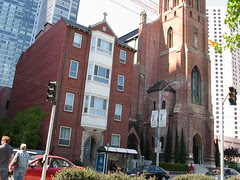 And we paid our final lazy farewell to a life-size bronze statue positioned outside but still inside the garden area. He looked like the late Ronald Reagan, last famously known as two-term US president but also known to Californians as one of its colorful and engaging governors. Funny but the statue showed him with multiple arms and legs. Couldn’t find any plaque explaining the obvious freakness. But knowing San Franciscans, I did not bother to learn more. Anything resembling weird, bizarre, out of this world, unearthly, etc., one can find it in San Francisco.

Exhausted but cradled comfortably by our BART seats, the trip back to Daly City was quite uneventful. The free fare day sure brought out a lot of residents, out of pallid existence indoors into a hot date with sunlight tanning.