Found a one-sentence item on this blog entry of MLQIII, about an essay on the status quo of the Filipino mestizo, by Mr. Carlos Celdran, himself a mestizo.

Though not quite complimentary to this once undisputed privileged class in Philippine society, the dirge-like essay was not only interestingly woven, but quite expository about certain thorny issues unique to this group. And more significantly, I believe though embellished somewhat for creative effect it was an earnest attempt at honest depiction of a sensitive topic usually skirted in public discourses. And an unintended consequence may have been the public unraveling of what could be a rather provincial or misconstrued perception not of the class itself, but of how membership is typically categorized or defined for that class. Rather than the more inclusive and generic perception that a mestizo is one with a mixed racial origin, and not necessarily just Spanish mixed with another ethnic group.

Interesting enough that I copy-pasted the entire entry, including all the comments. And many of the comments were particularly attention-riveting; though some were unkind, maybe even gratuitously unkind, such as the negative references to the current spoken American English. It ought to be evident that in any culture, there is bound to develop local or regional colloquialism that may appear undesirable and very pedestrian, but that does not normally typify the speech of an entire country. If one digs or studies deep enough, American English and its speakers are just as good as the other speakers of English, whether native or not. 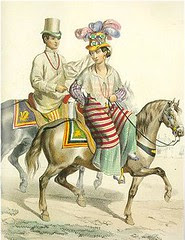 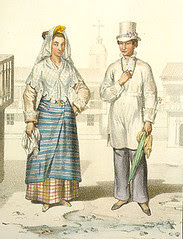 Even our supposedly common perception of who a mestizo is may not apply to all parts of the country. In the above-noted blog entry the implied definition appears to be essentially limited to the Spanish mestizo, yet in Cebu one commonly hears about the mestizo-sangley, meaning being part-Chinese. And this ought to hold true to the admixture with other foreign ethnic groups; though unwittingly we Filipinos tend to exclude groups that may have darker skin, among other things, than the average Filipino in our common perception of a mestizo.

One revealing comment was about what being a Filipino was - that being part-Chinese is what being Filipino is. Thus by extension, so would being part-Spanish, or part anything. After a colonization of 400 years by the Spaniards, there is no doubt many present Filipinos carry strains of Spanish blood in them, sufficient enough for many to be called mestizos. 400 years translate to a lot of generations for the opportunity to dilute the gene pool with Spanish blood.

And IMHO aquiline nose could not be a determining trait of a mestizo, since by definition it means a nose that’s curved down like an eagle, or also called a Roman nose. Though a hooknose, yet another name for it, does appear in all ethnicities, the typical Filipino mestizo, as popularly perceived, would have the straight narrow nose with a rather prominent bridge. And neither should a lighter or fairer skin be another determining trait. One can see local mestizos who have darker hues in their skin.

But if we search and look for the local mestizos who would satisfy our popular concept of who a mestizo is, as one heir to a Spanish or Spanish-sounding name, fair-skinned, hirsute, a family member of some old Philippine business or landed gentry, etc., then it would be easy to surmise that their number and influence is dwindling. It is quite easy to deduce this conclusion from this undeniable fact: the “native” Filipinos are expanding population-wise exponentially, while the mestizo group may not only have remained static (no considerable in-migration from anywhere), but as mentioned many have even left for other shores. Thus, simply through simple deduction or maybe anecdotal evidence, the effects of attrition may have caused their presence, influence, wealth, etc. to be greatly diminished, coupled with the fact that the overall population pie has grown a lot bigger and in favor of the other group(s).

And some names were mentioned in context: The Ayalas, Soriano, even Alma Moreno and Piolo Pascual. I do not know if the current Ayala/Zobel adults are anything but pure Spanish, and are thus to be called insulares, rather than mestizos.

Don Andres Soriano had a quite ironic citizenship history. Because of ethnicity he started as a Spanish national, then elected Filipino citizenship during the war to be able to serve in government, and in 1945 became an American citizen to his death. And I do not doubt that his children/descendants, Andres III for sure, are/were American citizens.

And yes, Alma Moreno, whose real last name is Laxamana, was originally from Cebu. My hunch is that though physical looks especially today may not make it very obvious, she is a real mestiza. Here’s what was said about her mother here:

The other night, we condoled with Alma at the Trinity Memorial Chapels (in Parañaque City) where Mama Jean’s wake is being held. While viewing Mama Jean inside her silver-colored coffin, looking very beautiful (mestiza features and all) as though she were only sleeping, we asked Alma if a reconciliation with Joey is still possible.

And even Piolo Pascual, here’s what is said about him on this site:

“But sadly, the German-Pilipino mestizo is discovering that the road to superstardom is paved with bad intentions.”

Thus, I suspect many of the current crop of movie stars and celebrities still can show that mixed strain, though the transfer from one generation to another may have somewhat diluted the strain and has made less physically obvious their mestizo heritage.

And another side issue brought up in the comments section was the use of coño, with its distinctly Filipino slant to the meaning of the word. However, a little visit to the site of Urban Dictionary will reward one with quite a plethora of the current usage of the word from across the Spanish-speaking world, some even without the use of the Spanish n.

Here’s the entry under the Philippine context:

.Coño - Originally means Vagina, Often heard spoken in the Philippines as a (1)curse or expression by Mestizos or by the rich people. Although this word has evolved with a different meaning, since it's usually heard from rich people in the society, the word "coño" now commonly refers to (2) someone who's rich, wealthy, classy or brat or a manner of speaking, it could be in a negative or (3) positive tone depends on how the word is used.