Today, I thought, was deserving of more personal introspection, but away from the flighty spiritual and mystical milieus. More on the mundane scratchings of the daily living of one's life. The daily, at times irksome and plodding, chores required to carry on decently and respectably with the passing vistas that make for the droning workaday life of most earthbound humans. Let us start with: 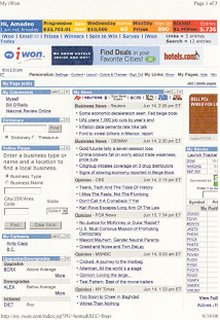 Of course, like most everybody else, you put your pants one leg at a time. But when you boot up that PC and click on your preferred browser, does it automatically bring up a web portal, or a selected personalized homepage?

Time was when web portals were such hot commodities. Netscape easily comes to mind since it pioneered with its proprietary internet browser. Yes, before the now ubiquitous IE. There were then little known web crawlers. But the browsers war was between Netscape and IE. Their duel to the death in a match considered by many as stacked against Netscape ended with IE now undisputedly ruling the roost.

So, is your web portal, MSN now? But there are still choices out there. What about Yahoo! Or might not Google also qualify? It now has so many services, just getting to know it enough boggles the mind. And there are even regional portals.

I know that personal choices are probably as numerous as the stars in the firmament, but in my little world, it has remained static and the same for the last 6-7 years. "Home" to me is a personalized version of iWon, endearingly called My iWon. Tailored to fit my own specific choices and idiosyncratic taste. It even shows the weather condition for the closest place to the old hometown 7,000 miles away.

In a very real way, it defines my person, though in a rather circumspect though still accurate way. My proclivity for science news, my need to track the Wall Street indices in which my puny future hinges on, search services for unfamiliar words, some places to click when needing some humor, and many other "editable" services that one can configure.

Thus, this reflected image of me greets me every time I open my IE browser. And this steady and faithful friend never fails to pique my interest and work me up to a perky disposition.

iWon is an Internet portal and search engine that offers users the chance to win money by earning entries in a sweepstakes. Entries are earned by performing the normal tasks performed on the Internet such as using search engines, checking stock quotes, reading email, and keeping up to date on the news.

Among major early backers of iWon was Viacom, parent of CBS and MTV. It is now owned by Barry Diller's InterActive Corporation, parent of the Home Shopping Network, Ask.com, Evite, CitySearch, Ticketmaster, and until recently, travel sites such as Expedia and Hotels.com.

When Excite@Home went bankrupt in 2001, iWon decided to buy over Excite. They designed a new Excite website and on 16 December 2001, the new Excite was launched.

Some spyware/malware detection programs attempt to limit access to iWon.com because of a program called "Aornum" that was installed for a short time by iWon users with other iWon applications. [1]

Which brings me to the next item.

To the non-business types, I fear that I may as well blabber along about the California slug. And maybe, especially for those outside of the US of A. But not to the millions little guys like me who have hitched our fragile financial futures to the coat-tails of Wall Street, whether in the equities markets, the bonds and other indebtedness markets, commodities/metals markets, etc.

To be succinct and to the point, because many of our pension plans, whether company initiated and financed or employee financed, have been invested in the markets of Wall Street in the myriad of plans that have cropped up during these many years.

Thus, the futures of many American workers, whether still actively in the marketplace or retired, hinge on the performances of Wall Street in general. It is estimated that over 70 millions of the labor force are invested into them. Thus, while traditionally Wall Street was limited to the corporate types, the stock broker types, and other white collar professions, it has now also evolved as part of the working man's domain.

Thus, every day or when opportunity allows, I religiously go through the 3 or 4 major indices. And My iWon also allows me to configure my page so it will also show the individual performances of each stock or mutual fund that I am invested in. 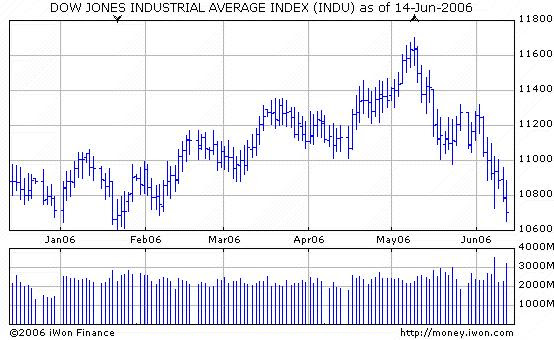 And what's the current short-term prognosis? This little Dow Jones Ind graph above should tell a more revealing story. Just this year alone, it recently went to an all time high close to 12,000, only to drop below 11,000. Now, it hovers on 10,700, losing in the process about 1000 points. 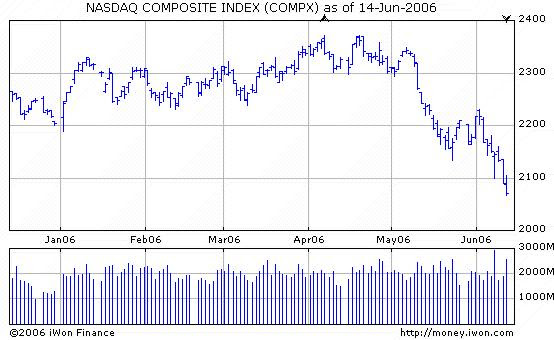 The tech index, Nasdaq, did almost similarly. I am particularly tracking one tech mutual fund I own that shows that at the present time I am showing that its present value is less than all the initial funds that I invested in it, including ploughed-back dividends. And I have held this fund since 1999. A continuing grim reminder of the last tech bust!

But lest anyone get the wrong notions, while the markets have gone south somewhat and temporarily, the US economy overall is going great guns - unemployment is still very low, the labor force continues to grow, productivity continues to improve, inflation continues to be in check amidst continuing fears of an upsurge, reported GDP growth is still commendable, as well as other crucial indicators. All this, amidst continuing costly wars, unprovided expenditures on national security measures against terrorism, and yes, with over 12 million illegal aliens taxing many public services throughout the country.
Posted by Amadeo at 6/14/2006 11:51:00 AM 4 comments: