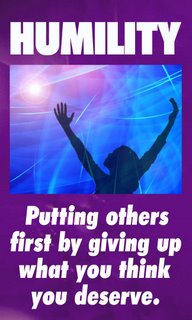 Living life to the fullest and as humanly perfect as possible requires an honest facing of facts. This is the core of the virtue of humility. Facing facts invariably leads to realizing how little one is compared to the rest of humanity and to any higher being.

True humility makes one realize how little he is not only to himself but to everybody else. The lower one reaches into self-esteem, so much the higher he rises to the higher good of truth. The more one attributes any good to himself, the harder he hinders the blessings of virtue to raise him to true perfection.

This is the truth about humility that each one should strive to put into action in daily lives, whether personally interacting or distantly writing about other people.

Nothing is more pleasing than the blessings of peace that true humility brings to our daily lives. One’s fixed attention to this personal nothingness and complete dependence on others or a higher being strips one of the false pretenses of pride that inevitably bring discord and chaos in one’s life.

Think hard about this.

How easily we understand that other people resent the man who seeks to raise himself above them, seeking to appear better and more learned. But no one resents one who appears little before his own eyes. Who does not seek admiration for its own sake, who does not think much what others think of him and thus not solicitous about honors, or human applause. Because he seeks only the higher approbation of goodness and truth.

The truly humble man refuses to defend his rights in unimportant matters. The truly humble man is not afraid or anxious to have others know his faults or correct them. He instead takes these humiliating experiences to show that he is not after earthy temporal glory, but after an improvement of self for the sake of the higher good and truth.

The truly humble man will not also compare himself with those who seem worse than he is. He would rather reflect on his own nothingness and be thankful for the infinite generosity of life he continues to enjoy.