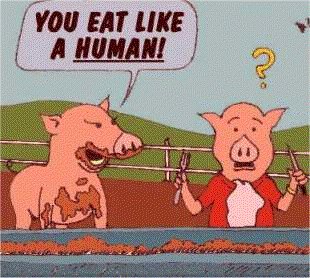 At this time, the still unresolved impasse in Canada involving the little Filipino immigrant boy of 7 chastised by his lunchroom monitor and school principal for his exotic table manners is about as passé as the proverbial dead horse being beaten.

But the continuing deadly silence emanating from the Canadians has allowed this little petty incident to not only take on a life of its own but could actually morph into an ogre of a situation.

The justifiably angry rhetoric coming from expats and compats of the islands nation of the Philippines continues to being heaped unabatedly upon the two hapless Canadian bureaucrats who have remained silent, at least publicly.

I wonder why they just do not get right on to it and explain where and what really is the crux of this problem. And mind you, I do not think it was the because the little boy showed ambidextrous finesse with his unusual ease in the use of two metal utensils (spoon and fork) why he was being chastised and isolated from the rest of his classmates during lunch. That can’t possibly be the real cause.

So why not just come up and say that Westerners get turned off seeing and hearing from some Asian cultures the manner they chew their food with mouths open and making audible lip-smacking sounds doing so.

To the typical Westerner’s eye while this may be part of the alien’s culture, it also seemingly smacks of unsavory table manners.

And you know what, they would probably have unanimity of opinion on this, including from those coming from those same cultures in question. 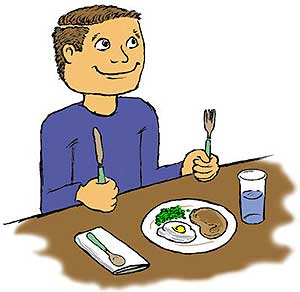 Consider the following reactions coming from Filipinos themselves:


FilAm from Stockton:
Who hates it when people make chewing noises and consume with their mouths open while eating / who loves to eat hot and spicy food / who loves all types of food …

A comment from one blogsite:
Re: Filipino Table Etiquette Punished at Montreal School
by jen on Fri 28 Apr 2006 09:54 PM EDT | Permanent Link
“Eat like a pig”???
Boy that makes me mad. I find someone chewing with their mouth open far more offensive. While they’re at it, they should clamp down on people who lick their knives as well.

A FilAm Student of UC – Irvine:
Pet Peeves? Chewing with mouth open/smacking your mouth when you chew.

A Filipina In Hawaii
Pet-peeves: People who PDA in front of everybody, people who chew with their mouth open, …..

From An Asian Lady in UC-Davis:
What are your pet peeves?
People who chew with mouth open, talk with mouth full;

From An American from faraway Rhode Island:
What things turn you off about someone?:
Smoking (It's not good for you). Chewing with mouth open. 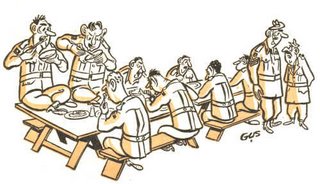 Here are a few statements from a blog entry that was intended as a parody on our most famous FilAm political journalist/blogger and best-selling author, Michelle Malkin:

Progressives have long questioned the authorship of Michelle Malkin’s books & articles, as it stretches credibility to imagine that someone who’s a minority twice over - not just a short person but one from New Jersey - would be capable of spelling her own name. While it’s true that Filipinos are known for being extremely rude, real Filipino women dress in mismatched prints & eat with their mouths open.

Linked to the last clause, eat with their mouths open, was the following:

Category: Geography
Subject: Lip-smacking Filipinos
Question:
I work in a small office with three Filipino employees and live in an area with a large Filipino population. It seems that most or all of them smack their lips when eating - and not quietly. I avoid taking lunch when they do because this is so annoying to me. I was taught that smacking lips and eating with your mouth open is very rude. Is this something common to the Filipino culture and not considered rude there?
POSTED 8/23/2004
Mike, Santa Cruz, CA, United States, 43, Male, Humanist, White/Caucasian, Gay, Finance, Over 4 Years of College, Upper middle class, Mesg ID 8132004122029 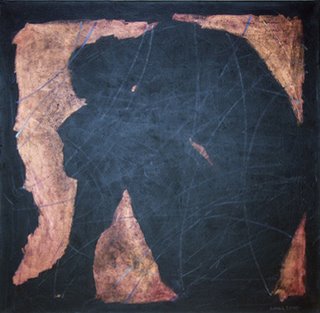 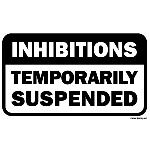 So now aside from being so full of. . . opinions, blogging also provides an easy and ready outlet for our inhibitions as a species. That is the conclusion reached by Mr. Daniel Henninger in his column in the Opinion Journal. According to him, a "Blogs Trend Survey" released last September, America Online reported that only 8% blog to "expose political information." Instead, 50% of bloggers consider what they are doing to be therapy.

Half of the bloggers surveyed confessed to self-medicating themselves by writing blogs and exposing to the public their repressed inhibitions; so in effect blogging for them, provides the “therapy for the uninhibited”. Much like being in a confessional?

But why the big fuss about inhibitions that we keep away from the public.

Granted that we have been taught early that repressing one’s inhibitions is generally not a healthy thing, and could lead to bad traumatic experiences later on in life.

But still somehow, we draw the line, granted an imaginary line, about things that we should continue to be inhibited about in public. Vile language could be one. What about our innermost sexual fantasies, maybe? Henninger mentioned the case of the alleged cannibal who was indicted recently here in the US. He had intimated his dark secrets on cannibalism on his blog. His writings may now form part of the body of evidence against him.

In fine, inhibitions do have positive roles in our lives, and they keep us honest and in civil concourse with the rest of our kind.

But does blogging really shatter the boundaries of inhibitions and becomes or has become whatever strikes a blogger’s whims and fancies?

Mr. Henninger admonishes and warns his readers with the phenomenon called disinhibition, “which is the breaking down of personal restraints and the endless elevation of oneself”.

Have we breached that point?

I say we may be aggressively approaching the threshold, unless we take stock and re-orient our collective focus.

When one visits the eclectic world of personal diaries, one can readily see unmistakable signs where age-old inhibitions have been breached and exposed to the world and we find ourselves none the better for them.

And in political blogs where the discourses are most heated, partisan and incendiary, readers are served daily a fat dose of insensitive, unkind, unchristian, etc. language that ought to have stayed where it came from – the side of the road where sewage and other debris are collected. So we could be fast approaching a break in the levee that has held our collective uneasy peace and harmony in constant check.

Other observers, of course, do not share this gloomy prognosis, for blogging specifically.

Rather, they believe this retrogression extends to all facets of culture, this newest medium being just a mirrored reflection of what is happening overall.

And of course, others cannot make heads or tails about this, whether it augurs well for some thing good or is a portent of things evil. But definitely, it leads to some kind desensitization to the evil and ugliness in this world.

But how does one get desensitized with vile language? Doesn’t it typically bring out the worse not only in the one originating it, but in the one reading and receiving it?
Posted by Amadeo at 5/05/2006 01:01:00 PM No comments: