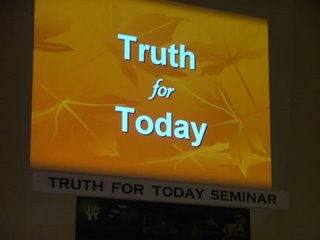 "Things known are in the knower according to the mode of the knower."

Most know and accept that the lines are drawn the way the are above. But do we take the time and effort to find out why the lines are there in the first place?

Fox News trumpets itself as being factual, fair and balanced in giving news and rendering opinions. O’Reilly of Fox touts himself as a venerable traditionalist, neither conservative nor liberal. And ratings-wise, his network rules the cable TV kingdom. But what does it make of the others in both cableTV and broadcastTV media? Slate’s Michael Kinsey now says that in today’s journalism objectivity in news is an unreachable goal, which is best left on a pedestal.

Everywhere one turns to read or listen, issues about objectivity in news reporting and other journalistic pursuits are constantly served and analyzed as questioned criterion for credibility and reliability. Even with regard to straight news, many pundits recommend that consumers read as many sources for news to arrive at the truth, because buried in all the redundant clutter are patent or insipient biases of those who report news.

It has become all too blurry and confusing for a typical consumer like me. I used to consume news much like the way one turns on radio. Turn the dial and stop on the first station that comes up and consume its feeds. After that, you can consider yourself well-informed by turning on that same radio, with the dial untouched and listening religiously to its feeds.

But obviously somewhere along the way this became insufficient. One now has to turn the dial every which way and listen to all the different voices coming out before one can arrive at the truth about the news.

Do we even know the differences between objectivity against opinion, or being objective against being opinionated?

We ought to get back to basics and define those two terms. Hopefully, one can then delineate certain thresholds to differentiate one from the other.

Here’s sampling of definitions of objectivity:

State of being detached from, and external to, whatever is being perceived or affirmed, often previously seen as aiding neutrality and therefore accuracy in judgment, but now seen as impossible or inappropriate in both science and theology.

The ability to view something without influence of feelings or emotions.

Expressing no particular opinion, neither for nor against, a topic or issue.


A personal belief or judgment that is not founded on proof or certainty; "my opinion differs from..”

Opinion is a person's ideas and thoughts towards something. It is an assessment, judgment or evaluation of something.

In academic terms, is the judgment or viewpoint reached after analyzing, assessing and evaluating arguments, claims and evidence. Academic opinion is objective, like that of a judge who weighs the evidence (for and against) and judges each case on its merits. (Personal opinion which is based on beliefs or codes of ethics, rather than evidence, is not acceptable in academic terms as it cannot be tested in the same way.) See What is Opinion? (in detail)What is Opinion in Academic Work? (in detail) Opinion in academic work does not mean personal opinion. It means the view-point or conclusion you come to after considering the evidence for or against a particular theory (analysis/explanation of events) and with reference to factual evidence or the logic structure of someone else's argument. Opinion in academic terms has to be demonstrated using evidence. The role of students is to select evidence which is appropriate and present it in such a way that any intelligent person could come to a similar conclusion (opinion).

A belief or judgment that is strongly held, but without actual proof of its truth.

What about being objective or being opinionated?


Undistorted by emotion or personal bias; based on observable phenomena; "an objective appraisal"; "objective evidence"

Independent of the perceiving individual; in Spinoza, as existing in thought.

Obstinate in your opinions.

Let us then collate all these disparate definitions and come up with one definition for each term or point of view. Hopefully we should be able to distinguish the differences (and/or similarities) between the two.

Our collated definition of objectivity:

A detached universal understanding of an act supported by empirical demonstration and verification, aiding in neutrality and accuracy in judgment, and uninfluenced or undistorted by feelings and emotions. Which understanding is independent of the person giving the report and is the ideal that media producers are fair, accurate, unbiased conduits of information.

A strongly-held personal belief and judgment not founded on proof or certainty, thus is a personal assessment or evaluation to be differentiated from academic opinion or public opinion which are two different things.

Studying closely the two points of view one can readily distinguish the obvious and nuanced differences between them and thus be able to distinguish how well producers in media are doing in their straight news reporting and their rendering of opinions.

A little monkey wrench has been thrown by that above quote from Thomas Aquinas.

Succinctly stated, Aquinas meant that how we perceive and know is affected by our own individual context. Though we are born literally with minds looking like blank slates, our experiences as we grow up and interact with other people become the filter through which we understand things and events. And in like manner, how we report things and events is also uniquely affected by all this.

While perfect objectivity may indeed be an unachievable ideal in this imperfect world we live in, the primary responsibility of journalism should not be shunted aside either. A journalist is still bound to search for and report facts that are accurate if he is to report news, or straight news. While an opinion writer may not only be bound by a similar code, there is the added ethical caveat that must be subscribed to, which is intellectual honesty or forthrightness in his/her writings.

In the crucible of public opinion and the harsh realities of the public arena, how are these media producers to be judged, and who are the qualified judges?

Why not rely on the consumers and their choices? What use are revered principles, rules, and other good stuff taught and adhered to in journalism and by journalists if they fall short of their avowed goal of having people read, listen and cater to their products?

Before the era of cable television, the broadcast networks ruled supreme. The Big Three stood literally unchallenged. Not anymore. Cable TV networks are now close on their heels while the collective viewership of the Big Three continues to careen downward. In fairness, their numbers are still gargantuan compared to cable TV, but the continual downward spin is a portent of things to come. Remember also, that viewing broadcast media carries no cost, unlike cable TV. Thus as cable TV makes more inroads and connects and wires more distant places in the continent, we can expect their numbers to continue increasing.

In another milieu, before the birth of the blogosphere, the MSM ruled their own domain unchallenged, epitomized by the venerable broadsheets, news mags, and other glossy publications. Again, not anymore. The major newspapers in the continent continue to lose readership and reach. The newsmagazines are on the same path. Who will be next? I believe it is only all a matter of time.
Posted by Amadeo at 4/08/2006 11:44:00 AM 3 comments: